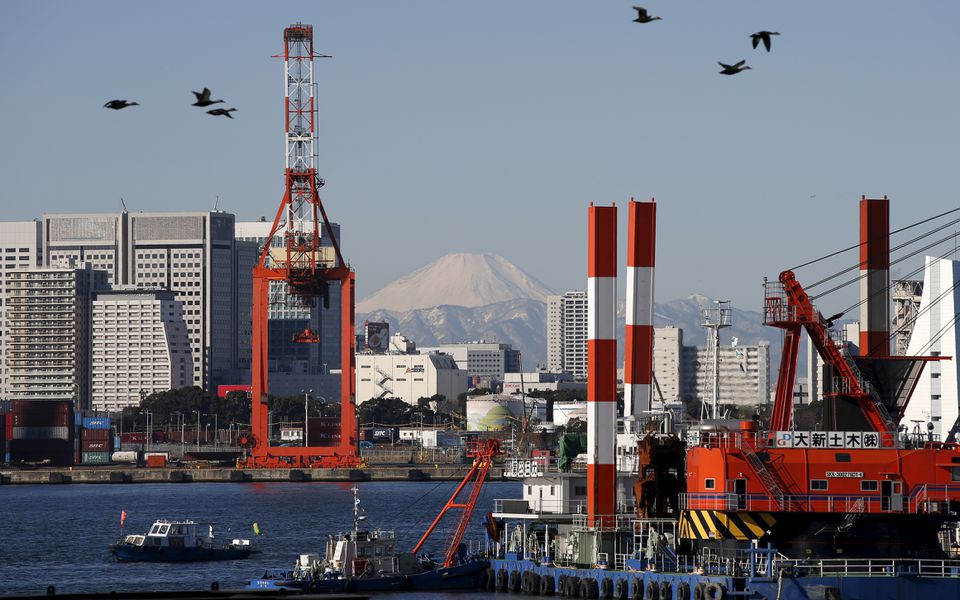 Birds fly in front of Mt. Fuji and a crane at a port in Tokyo, Japan January 25, 2016. REUTERS/Toru Hanai

The mixed batch of data will likely highlight the challenge policymakers face in combating a spike in Delta variant cases, without choking off a fragile economic recovery.

Exports likely surged 39.0% in July from a year earlier after a 48.6% spike in the previous month, according to analysts polled by Reuters, though the figures are inflated by the base effect of last year’s pandemic-induced slump.

“Exports will remain strong with capital and IT-related goods serving as main drivers thanks to robust global demand for capital expenditure,” said Kenta Maruyama, an economist at Mitsubishi UFJ Research and Consulting.

Imports likely rose 35.1% in July from a year earlier partly due to rising raw material costs, the poll showed.

In a sign of weak domestic demand, Japan’s core consumer prices likely fell 0.4% in July from a year earlier, according to the poll.

The drop is partly due to a change in the base year for the consumer price index (CPI) that gives a heavier weighting to cellphone charge fees, which have fallen sharply recently.

Analysts expect the base-year change to shave about 0.7 percentage point off core CPI. Under the new base year, core consumer prices fell 0.5% in June, according to the government, compared with a 0.2% gain under the old base year.

“Japan won’t see inflation accelerate as much as in the United States and Europe with service-sector firms under strain from the pandemic,” said Takeshi Minami, chief economist at Norinchukin Research Institute.

Core machinery orders, meanwhile, likely shrank 2.8% in June, falling for the first time in four months in a worrying sign for capital expenditure, the poll showed.